CCC Library's Policies and Procedures page addresses topics such as:

CamCat is a library catalog collaboration between the Camden County College Library and the Camden County Public Library System. Some items that are used by students may also be found in the public library's collection.

However, the Camden County Public Library is a separate library system with significantly different policies.

For additional assistance or more information, please check out our Frequently Asked Questions.

The Wolverton Center underwent a major renovation starting in 2000 and was re-dedicated on September 24, 2003. This renovation brought the Library, Testing Center, Open Computer Lab, and Tutoring into the 21st century through data access enhancements, improvements to the electrical infrastructure, asbestos abatement, and better access to the physical building. 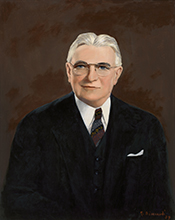 Charles Anderson Wolverton, a Representative from New Jersey; born in Camden, N.J., October 24, 1880; attended the public schools and was graduated from the law department of the University of Pennsylvania at Philadelphia in 1900; was admitted to the bar in 1901 and began practice in Camden, N.J.; assistant prosecutor of Camden County, N.J., 1906-1913; special assistant attorney general of New Jersey in 1913 and 1914; member of the State house of assembly 1915-1918, serving as speaker in 1918; Federal food administrator for Camden County 1917-1919; prosecutor of pleas of Camden County 1918-1923; elected as a Republican to the Seventieth and to the fifteen succeeding Congresses (March 4, 1927-January 3, 1959); chairman, Committee on Interstate and Foreign Commerce (Eightieth and Eighty-third Congresses); was not a candidate for renomination in 1958; resumed the practice of law in Camden where he died on May 16, 1969; interment in Harleigh Cemetery.

Information provided by the Biographical Directory of the United States Congress.

Located on the Blackwood campus of Camden County College, the Camden County College Library provides a quiet environment for research and study as well as group study space, a dedicated classroom for information literacy classes along with knowledgeable and friendly librarians and staff to assist students and faculty. Our collection includes print and eBooks, databases, CDs, audiobooks, DVDs, laptop computers, textbooks and anatomical models. Librarians are available in-person as well as by live chat, text and email during regular library hours. Library Guides for specific assignments and general information are available 24/7 to provide students with research and citation assistance.

If we don't have what you need, we have a daily courier service between the Camden County Public Library System and Camden County College Library. This means you can request a book from the public library and have it delivered to campus. InterLibrary Loan service is also available for books and articles outside of the collection. For more information on these services, click here.

Librarians are available to teach information literacy classes and will work with faculty to develop library guides for assignments.

The Library at Camden County College serves as an essential part of the college and is imperative to the College’s mission of providing a high quality, accessible and affordable education.

To support the College’s vision of being a gateway to opportunities for students to achieve their full potential and meet their academic and career goals.